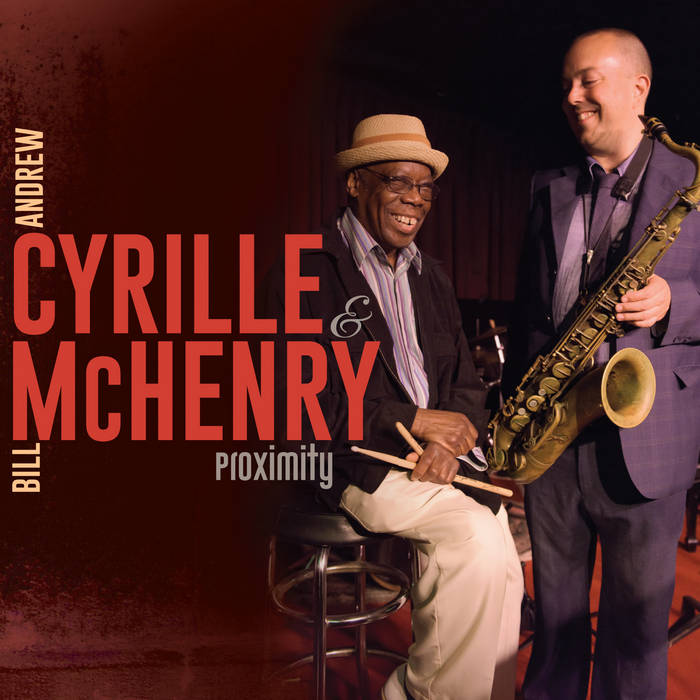 The recessed red and black stage of the legendary jazz institution The Village Vanguard has been a backdrop for creative inspiration and spirited collaboration for over 80 years. It has remained an intimate venue where artists can let music blossom over an extended engagement. It was during a weeklong residency of saxophonist Bill McHenry that Vanguard regular Max Koslow was struck by a particular partnership, enough so to jump into a business in which he had no experience: recordings.

On his usual Thursday night attendance at the Vanguard, Mr. Koslow heard McHenry perform in a duo with the luminary percussion master Andrew Cyrille. The chemistry between McHenry and Cyrille was palpable and the music magical. Koslow knew that this magic had to be preserved and approached the two musicians to see if they would allow him to record them together.

The rare duo setting between percussionist and saxophonist has only a few recorded examples, think John Coltrane and Rashied Ali’s classic Interstellar Space. Cyrille has long been a leader in the improvisatory field, most notably in the New York downtown loft and spiritual jazz scenes of the 1970s and 1980s. McHenry hails from a later generation that revamped New York’s small club scene in the 1990s, most visible in the inception of Small’s Jazz Club in the West Village. He has also been regarded as one of the torchbearers of the saxophone over the past decade.

The resulting Proximity was recorded over two days in November 2014 for Koslow’s newly minted Brain Schism Productions, LLC. The recording features pieces written and improvised by the duo along with tunes written by Cyrille’s peers Don Moye and Muhal Richard Abrams. The approach to the music was relaxed and fluid with both musicians finding inspiration in the other’s voice.

The recording begins with “Bedouin Woman,” a subtle rumination on Moroccan music that was highlighted in a documentary on John Coltrane that transfixed McHenry and composer Cyrille. The version of Don Moye’s “Fabula” is playful and offbeat. Cyrille’s “Drum Song For Leadbelly” is a joyful tribute to the blues icon Huddie Ledbetter and an adaptation of the guitarist’s “Green Corn,” featuring some tremendous interplay between sax and drums. Muhal Richard Abrams’s “Drum Man Cyrille” is a feature for the man for whom the song bears its name and, in support, equally dynamic playing from McHenry.

The title track is a somber, even toned tribute to Cyrille’s friend, trombonist John Bernard Gordon. The strident “Let Me Tell You This” is a moving duo improvisation with echoes of Ornette Coleman, which is followed by the brief and beautiful “Broken Heart.” Lithe saxophone introduces “Aquatic Life” before Cyrille swings in with an energetic pulse all his own. “Double Dutch” is playful and demure. “Seasons” is all about tone and pulse with McHenry playing long tones and Cyrille utilizing minimalist percussion in creating a tone poem of sorts. “Dervish” continues the playful Moroccan mood established earlier with a vigorous, percussive conclusion to the recording.

The duo setting provides an intimate setting for creation. Andrew Cyrille and Bill McHenry’s Proximity presents a fantastic example of the type of inspired music that can come from musicians of high ability and individuality being paired together. Thanks are due to the individual who immediately heard the singular promise of their collaboration within the nurturing confines of the Village Vanguard.

Bandcamp Daily  your guide to the world of Bandcamp